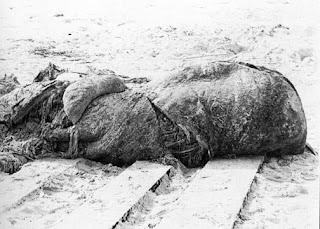 The Lusca is an oceanic cryptid sighted in the Bahamas. It seems to prefer living in brackish water, as it is usually found in warm bays and lagoons. Luscas usually appear in "banana holes," which are saltwater pools inland that are connected to the ocean. The Lusca resembles a giant octopus, much like the Kraken. It is about 20-30 feet long and it has immense suckers for its size. In some accounts, unlike a normal octopus, it has small spines and teeth. The Lusca is very fast-moving and can propel a cloud of ink to hide itself. It is known to eat humans. No research has been done into studying the Lusca, though it may in fact be an inland-trapped population of humboldt squid. This creature matches the Lusca's behavior, though not its size. The Lusca may also be the animal responsible for the oceanic blob-like corpses known as globsters.
Posted by BlueDragon at 5:43 PM

BeastPedia is a registry of cryptids, mythological beasts, creatures from folklore, and other animals that may or may not exist. Begun while I was a freshman in high school, it's currently being revised and updated for the first time in half a decade. As time goes by, I'll post more and more information, and make this blog an even better resource.
© BeastPedia 2008-2014.
All rights reserved.